Experiencing Beautiful Bermuda with a Toddler

Every year, I spend a dozen hours on Kayak Explore, typing in possible dates and the maximum amount I’d want to spend on a flight, and then perusing the destinations that pop up. But I’ve never actually used the tool… beyond adding fuel to my travel daydreams.

Then, only a few weeks ago, Ben and I decided that we needed to travel RIGHT NOW. As in, before January 1. Why? Because Little One is turning two on December 31st and then we’ll need to start buying him a seat. Why not get in one more three-for-the-price-of-two deal?

We thought we’d head to New Orleans, but then Kayak presented us with Bermuda! Cheaper flights. Better weather. Another stamp on our passports. (Yes, we are that shallow.) We booked it!

Until a few nights before our trip, we made no plans. After all, Bermuda is a British possession and the island’s national language is English, so we weren’t worried about figuring out logistics. I downloaded Fodor’s Bermuda Guide on my phone and we booked an Airbnb, only checking that it was within walking distance of a beach and a grocery store. (As it turns out, Bermuda is so small that you’ll only ever be one mile max from the water.)

Though I really had no expectations beyond relaxing and soaking up time with my boys, Bermuda exceeded my dreams. Every activity was centered around our Little One — and each was enjoyable for Ben and me, too. Here’s the scoop on our awesome trip. 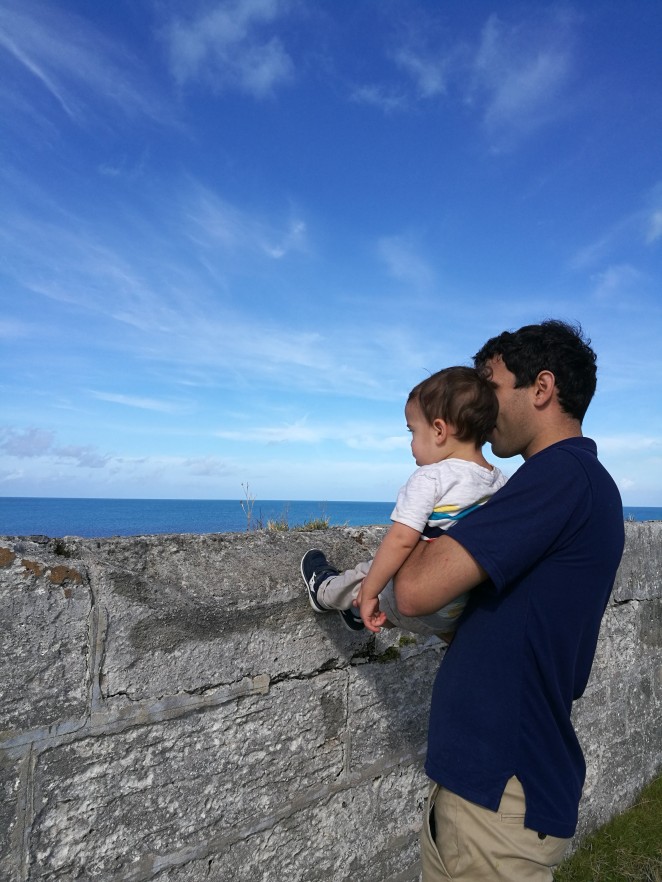 Apparently, December is the off-season in Bermuda. The weather was mostly in the low 70s and the water was cool but refreshing — once we got our shoulders wet. Arriving from freezing New York, we were in heaven. Our dry skin cleared up within a day. We wore t-shirts and pants and short-sleeve cotton dresses. Best of all, we felt like we had the island to ourselves. Our local beach, Tobacco Bay, an exquisite azure body of water surrounded by mammoth rocks, was practically empty. Little One actually napped for two hours under a palm tree while Ben and I indulged in our books and magazines. Turns out, island breezes are perfect for long snoozes. 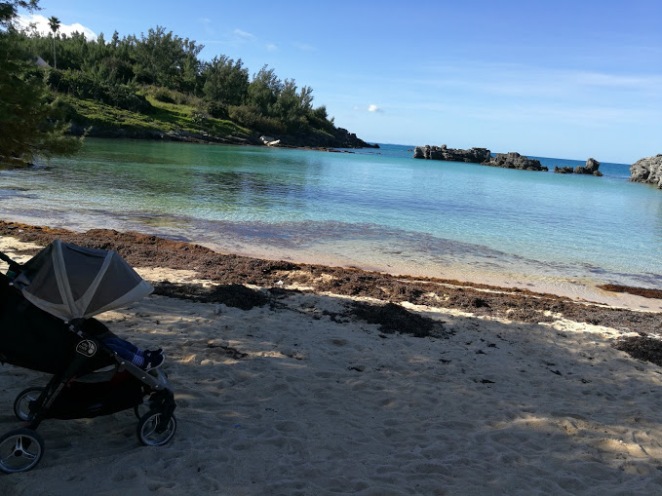 Perfect place for a nap

Of course we brought a car seat with us because that’s what we’ve been programmed to do. But we only used it to get to and from the airport. Aside from that, we took buses all over the island.  (Renting a car isn’t even an option!) The buses came about every 15 minutes, ran smoothly and quickly, and hit up all of the popular destinations, with Little One riding for free. He loved the bus — or so I think, because he fell asleep on many of our rides.

I am an Airbnb proselytizer, especially when traveling with Little One. In my experience, you can get much more room — ie more than one room — for a cheaper price than hotels offer. That means that when your Little One goes to sleep, you don’t need to keep the lights off and your voices down. Bermuda has lots of hotels and many of them are resorts. While resorts offer tons of great amenities for traveling with kids — like free meals and activities — I’m still partial to Airbnbs.

Our Airbnb was located in St. George’s, a historic town and a UNESCO World Heritage site that was coincidentally (we didn’t check in advance) very close to most of the sites we wanted to see. A two-story apartment with a living room and small kitchen downstairs and a bedroom and bathroom upstairs, it was owned by a local church and next door to the minister’s family home.

I honestly can’t say enough good things about this Airbnb. The kitchen was stocked with a few bottles of water, dried fruit, nuts, and cookies. The church member who managed the property gave us a Christmas care package, complete with mugs, stuffed smiley faces with Santa hats, and a Bermuda calendar, keychain, and magnet. We also had a flip phone with credit on it at our disposal. The church members were incredibly friendly, as were our neighbors, who would stop to chat with us in the street.

The negatives? Bermuda is a very humid country and without a dehumidifier, our apartment was extremely damp. If you have asthma — or even had childhood asthma, like me — be sure to bring an inhaler with you! And don’t expect your towels to dry. Also, clean up after yourself religiously. Scattered coffee grains bring out the island ants!

This was our first international trip with a walking/running/jumping/dancing Little One who no longer wants to be in his Ergo Baby carrier 24/7 — or ever. We planned activities that were Little One friendly and shortened museum visits. These destinations were the highlights:

The museum is the Bermuda Natural History Museum, and yes, this space really does include all three. We spent over 5 hours here, which was great because it was raining the day we visited. The aquarium was especially amazing with floor-to-ceiling fish tanks that kids can sit in front of for minutes/hours and be entertained. At two points, aquarium staff submerged into the tanks to primp and clean and clap along with our Little One. The seal feeding was modest but a highlight, because when are they not? 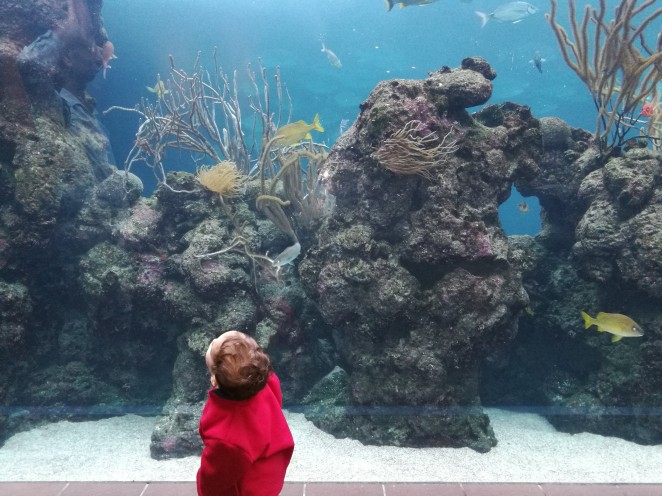 The Crystal and Fantasy Caves were actually discovered by two kids while they were playing cricket. Today, you can descend into them and marvel at the stunning stalactites and stalagmites and pools of water. Head for the Crystal Cave, which is much easier to maneuver. The steps are dry and manageable even with a baby in hand.

The Royal Naval Dockyard brought us to the other end of Bermuda within an hour and a half, thanks to a bus and a ferry — all of which Little One slept through. There you’ll find the National Museum of Bermuda, some delicious restaurants, and a crafts fair, among other shops and sites. The big draws for Little One included walking along the museum’s ramparts — which used to be a fort, chasing after goats, which are there to maintain the grass, sitting on old cannons, and playing in the playground.

By far, Little One enjoyed the beaches the most. We couldn’t manage to find a pail and shovel, but it didn’t matter because he was endlessly entertained by scooping sand with a plastic spoon and putting it into a paper cup. Phew! We spent time at the beach during four out of five days and Little One took two long naps there. Horseshoe Bay, which has pink-tinted sand — though I had to look closely to see it — was lovely, but Tobacco Bay was exquisite and only a 10-minute walk from our Airbnb.

On our trip to Chile, we swore by a small pack of Tegu Magnetic Blocks. This time, we upped the ante with Playmags Square Set. Magnetic blocks or tiles are the best for traveling because they’re entertaining and they’re almost impossible to lose.

The thing I feared the most about traveling with a toddler was lugging around a car seat. They’re so unwieldy! Not the Cosco car seat — which is super light and can hook onto your stroller for easier maneuvering. Plus, they’re pretty inexpensive, as far as car seats go. Get one immediately.

Sidewalks are few and far between

Ben and I are city people who love to reach our destinations by foot. If it takes two hours to walk somewhere, we’re game — and time Little One’s nap accordingly. But in Bermuda, walking long distances is rarely an option. There are few sidewalks — and when there are sidewalks, they are extremely narrow. Street shoulders are almost nonexistent, too. So be careful — and take the bus!

During our first day in Bermuda, we realized that it would be almost impossible to eat for less than $50 in any sort of restaurant. So, we decided to take a deep breath and not let it bother us. Especially because “Mama needs a Dark & Stormy” became my ongoing refrain after I tried one of Bermuda’s national drinks. Many restaurants offer kids’ meals, but don’t expect them to cost $6. They’re more like $10-$13 in Bermuda. 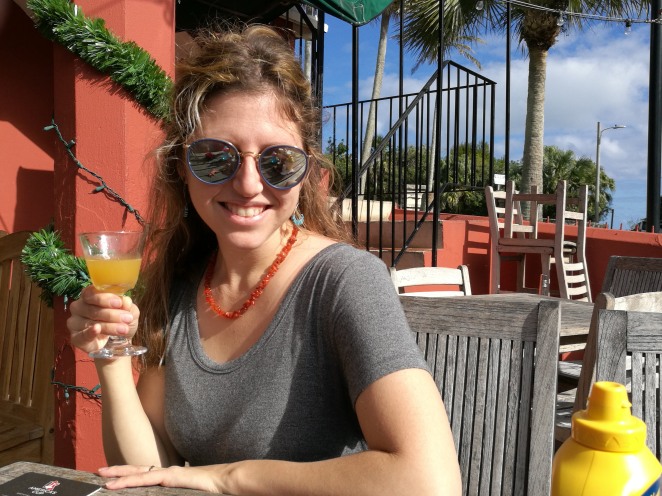 This is actually a Rum Swizzle, another Bermudian classic, but I wasn’t complaining.

Bermuda is far and away the friendliest destination I’ve ever traveled to. Drivers will literally slow down when they pass to greet you with, “Good afternoon. How are you?” Locals will make small talk that somehow doesn’t feel like small talk. It feels genuine and warm. Though I am an unfriendly New Yorker at heart, I relished in Bermuda’s kindness. So, get ready — people will talk to you and your Little One.

Is Bermuda calling your name? Tourism is down. The weather is good. And the people will greet you with open arms. 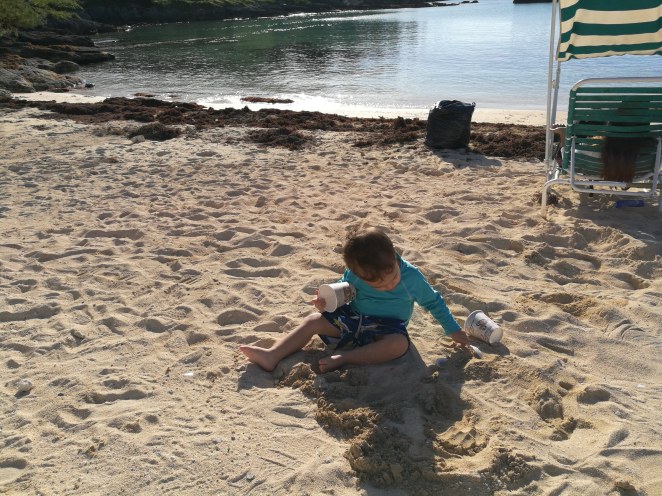 4 thoughts on “Experiencing Beautiful Bermuda with a Toddler”