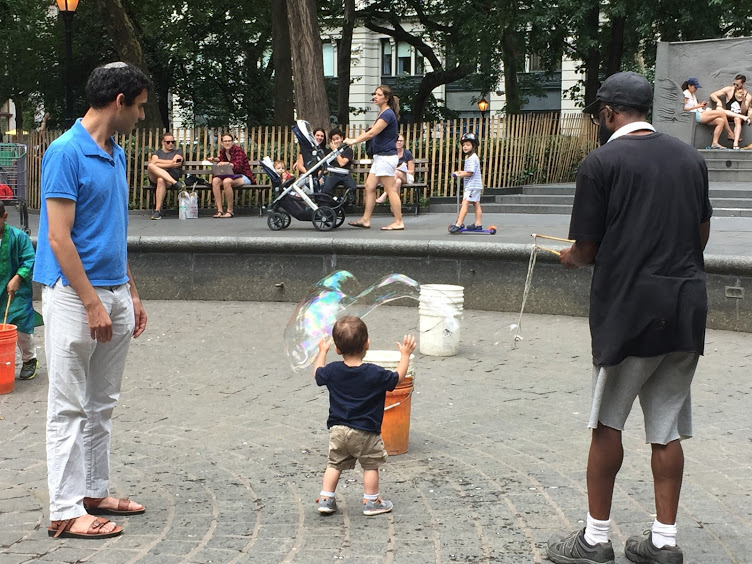 Today I picked up Little One from daycare and decided that we needed to do things a bit differently. We wouldn’t go to the park and see the same people who we see every day but barely acknowledge. We wouldn’t go to the grocery store to pick up everything we either desperately need or sort of need. We wouldn’t go home, where I’d alternate between holding Little One while doing cooking tasks that involved neither knives nor flames and setting him on the floor to play with pots and pans.

No, today, I was feeling restless. So, I decided that we needed to switch things up.

Instead, we took the subway to Times Square. We bought a few bananas along the way and headed to Bryant Park. We sat on the field, alongside other New Yorkers and tourists, who were tanning, tossing volleyballs, and simply enjoying the summer day. We met another mama and her 18-month-old, who promptly sat on my lap and took Little One’s food. We schmoozed and talked about motherhood and work and the summer. We hopped on a carousel and snapped a few photos. We surprised Ben at work. And then we ate at a Korean restaurant in Korea Town, which we’d never before tried.

No, today, I was feeling restless. So, I decided that we needed to switch things up.

And, in the middle of dinner, Ben asked me the burning question, “Why don’t we do this every day?”

It was exactly what I’d wondered.

Parenthood has definitely made me a lot more local. We eat most meals at home, and when we don’t, we head to a restaurant that’s one block away. We hit up two parks every week — both within six blocks of each other. We rarely go further than half a mile from our home. And there are a lot of good reasons for that! Little One comes with a lot of stuff — diapers, snacks, drinks, changes of clothes, toys, and strollers — and all of that stuff is heavy! And he doesn’t relish sitting in a restaurant booth as much as we do.

But, there’s nothing I love more than exploring my city’s streets, spending time outdoors, and seeing beautiful things.

So, I decided to shake things up. To do what I loved. To show Little One the sweetness of spontaneity. And to soak it up with him and Ben.

It was a perfect afternoon, which ultimately gave me more energy than it took.

And I was happy that, at the end of it, Ben was there to help me entertain an exhausted Little One on the subway and wheel him home. 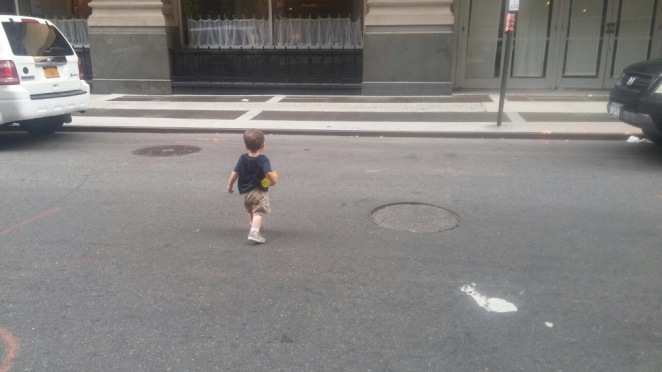 Little One crossing a closed-off street!